Its hard to explain my situation in under three minutes. I am thankful to Yoselin Person for breaking our story. I want to clarify one point that has been confusing some though.

The headline let some believe that I cannot travel back to the United States because of some sort of legal restriction. Its more complicated than that.

First I want to say that I love living in St Kitts. I don’t want to move back to the United States. Who wouldn’t want to live on a Caribbean island? Growing up here was awesome.

Until I reached 18, I absolutely could not travel anywhere. I am listed as missing in the US but they also had me listed on Interpol. 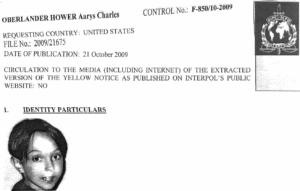 Any border I crossed would have triggered an immediate alert and resulted in my detention:

I am 25 now but still listed as a missing person. This creates problems for background checks and security clearances. For travel they cannot hold me but can detain me to ask questions and seek replies from the US authorities. I work as a yacht captain and this is a huge liability for me. In the Caribbean most islands are separate countries and require border checks to enter.

My dad is really sick. Because of this I have to help my younger siblings get to school and do other things my dad can’t do. This makes it hard for me to travel very long. My dad has not been able to leave the tiny island of St Kitts since he returned from Bulgaria in 2009. My dad is completely trapped here and has been for 12 years unable to get the medical care he needs.

This is why I said this in the interview:

25-year-old Aarys Hower is seeking help to be able to travel back to the U.S.

Hower and his father are unable to travel back to the United States because of a custody battle that went too far.

Alex is Missing? 2022 . Powered by WordPress